Kevin Mottley of The Mottley Law Firm is pleased to announce the settlement of an orthopedic injury and traumatic brain injury case on behalf of the firm's client, who was injured when a DHL Express (USA), Inc. delivery van ran a stop sign and pulled in front of him on Route 40 in Blackstone, Virginia, at the entrance to Fort Pickett.

The client was referred to Kevin Mottley by a lawyer in a small firm in Kenbridge, Virginia, who occasionally would handle a personal injury case, but who did not primarily practice in the area of catastrophic injury cases.  The lawyer wanted to make sure that his client's case was handled properly.

Kevin Mottley and Ben Kyber filed the case in the Circuit Court of the County of Chesterfield, Virginia.  A month before trial, and several weeks after the parties conducted a mediation session with the Hon. Michael Allen (Ret.), the case settled.

On December 5, 2016, the firm's client was working as an auto parts delivery driver for his employer, O'Reilly Auto Parts in Blackstone, Virginia.  He was driving a company car on Route 40 in Blackstone, and was approaching the main entrance to Fort Pickett.  As he approached the intersection, he noticed a yellow DHL delivery van pulling up to the stop sign at the intersection, leaving Fort Pickett.  Suddenly, and without warning, the DHL van "gunned it" and pulled right out in front of the client, who was traveling about 45 miles per hour down Route 40 at the time.  The last thing he remembered was the big red "DHL" on the side of the van.  A severe collision occurred, in which the client's car and the DHL van were spun around several times before coming to a rest.  His next memory after that was of hearing the creaking of his car door when someone was trying to open it.  He did not remember anything in between.

In the crash, the client's right knee hit the dashboard in his car, shattering the knee, and his face slammed into the deployed air bag, resulting in a gash to the bridge of his nose.  He was taken by ambulance from the scene of the accident to Southside Community Hospital in South Hill, Virginia.  X-rays of his right leg showed that he fractured the right tibial plateau. The day after the accident, he underwent surgery on his leg and knee by Dr. Rupa Patel, an orthopedic surgeon at Southside Community Hospital.  Dr. Patel repaired the leg by making a long, hockey-stick shaped incision on the side of the knee, exposing the fracture, and then installing an L-shaped titanium plate in his leg using seven screws into the leg bone.  The next day, the firm's client was discharged from the hospital to home.  For several months after that, he received physical therapy at home and at the office of a physical therapist in South Hill, Virginia.  After several months of physical therapy, he was released from physical therapy.

Although the records from the emergency room indicated that he had an abrasion on his forehead from the airbag, the records said nothing about the client suffering a traumatic brain injury (“TBI”), or a concussion, in the crash.  The records actually said that he did not “lose consciousness” in the crash.  The client did not recall whether he did or did not lose consciousness.  But he could not remember certain aspects of what happened.

Several months after the accident, the client told his primary care medical provider, a nurse practitioner, that he was experiencing double-vision, ringing in his ears, and problems with his balance. She referred the client to a brain injury medicine specialist named Gregory J. O’Shanick, M.D. in Richmond, Virginia, who owns the Center for Neurorehabilitation Services. Dr. O’Shanick immediately diagnosed the client with a mild traumatic brain injury (“TBI”) from the accident.  A mild TBI is commonly known as a concussion.

Dr. O’Shanick believed the client's brain injury was caused by what is called a “coup-contrecoup” movement of the brain within the skull.  A coup-contrecoup injury occurs when a person's brain moves back and forth, or side to side, within the skull.  A person’s brain is 70% to 80% water, and it moves within the skull.  The inside of the skull has hard, sharp bony ridges along the base of the skull.  In an accident, a person’s brain can move around inside the skull and against these bony ridges, causing injury to the microscopic cells within the brain.  In this process, the part of the brain cells called the “axons” are injured, resulting in the axons leaking chemicals that damage neighboring cells.  This, in turn, causes the neighboring cells to be damaged and die.  This cascading effect of damage to a person’s brain cells after trauma, resulting in cell death, is called “apoptosis.”  This cascading effect usually takes place within the first 24-48 hours following an initial injury, but it can be a prolonged process. 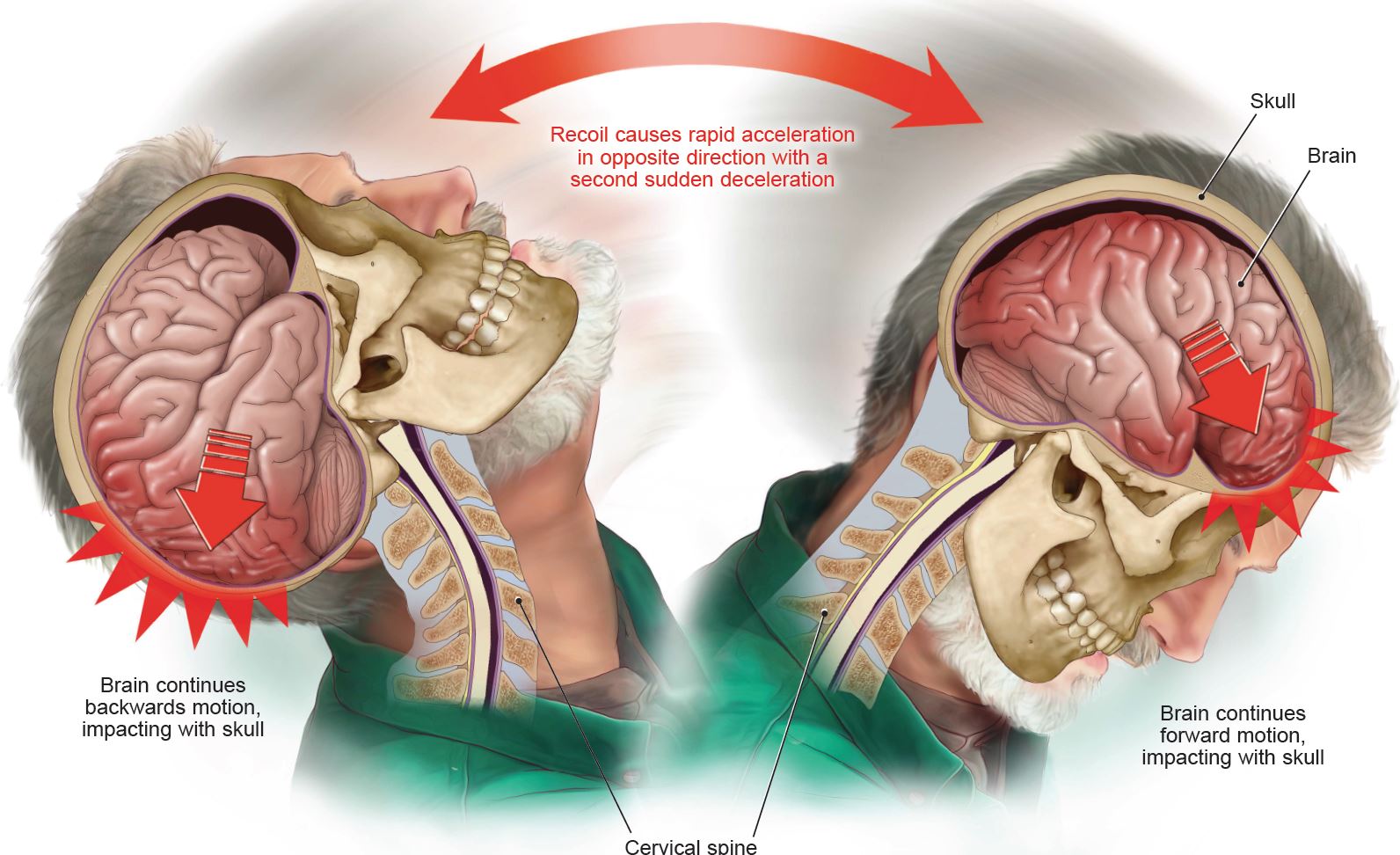 The effects of the TBI lingered and failed to go away entirely.  In addition, the orthopedic injury to the client's knee continued to cause him difficulty, and negatively affected his ability to walk and to maintain his balance.  Following the surgery, he required the use of a cane.  The client lost his job due to his inability to do the physical requirements of the job, sending the client to an early retirement.  The Mottley Law Firm filed suit to recover damages for the medical expenses, lost income, and pain and suffering experienced by the client as a result of the collision.

DHL Argued It Was Not Responsible for the Crash

Another challenge in the case was the client's age, 73 years old.  Because of his age, his work-life expectancy was not that large, which resulted in the claim for lost earnings in the future to be lower than is the case with a younger person.

Before trial, the parties agreed to settle the client's claims for $725,000.