Company Agrees to $6.5 Million Settlement for Failing to Properly Secure Wheelchair in Van Resulting in Spinal Cord Injury and TBI

Are You a Referring Attorney? Read About Our TBI Referral Program

Kevin Mottley of The Mottley Law Firm is pleased to announce the successful resolution of a difficult case involving a spinal cord injury and traumatic brain injury ("TBI") suffered by a firm client whose wheelchair flipped over in a van, when the company who operated the van failed to properly secure the wheelchair.

The case was referred to the firm by a solo practitioner lawyer in Richmond, Virginia, who does not handle personal injury cases.  He was looking for a firm that would handle the complicated case properly for the client.

The client was a 29-year-old young man who suffered from profound physical and mental disabilities, from which he had suffered his entire life. Specifically, he had cerebral palsy and a seizure disorder. He was unable to verbally communicate. His ability to walk and stand without assistance were impaired. Although he could go from sit to stand on his own and could walk in the house without assistance, he required minimal handheld assistance in other environments, and he was a fall risk due to his poor gait. As he got older, he used a wheelchair more frequently, particularly for safety when he was being transported or when he was out in the community. He required the assistance of one person with virtually all his activities of daily living (“ADLs”), such as bathing, toileting, eating, and dressing.

The client lived with his parents, who lovingly took care of him at their Henrico, Virginia home. Although he was severely disabled, his mother was able to adequately care for him at home while his father worked in the family grocery store in Richmond’s West End. The family was originally from Bangladesh, and had immigrated to the United States in the 1990s. Due to the family’s culture, which values family taking care of each other, they had decided long ago not to place the client in a group home or into any sort of assisted living facility. His siblings had expressed a desire and willingness to take him in once the parents were unable to do so.

On the date of the incident in question, the client was being transported from adult day care in Henrico County, Virginia, to his home.  He was being transported in a van that was designed and equipped to transport him.  The van was operated by a company that was in the business of transporting people with physical disabilities.

The entire incident was recorded on the van's interior video recorders, which became a key piece of evidence as to what happened. Unfortunately, the driver of the van neglected to properly secure the client’s wheelchair in the van before departing the day care facility.  As a result, when the van made a U-Turn on Staples Mill Road, the client’s wheelchair flipped over, and the client’s head and neck violently slammed into the metal wheelchair lift in the van. The client suffered an injury to his spinal cord, as well as a traumatic brain injury, in the fall. 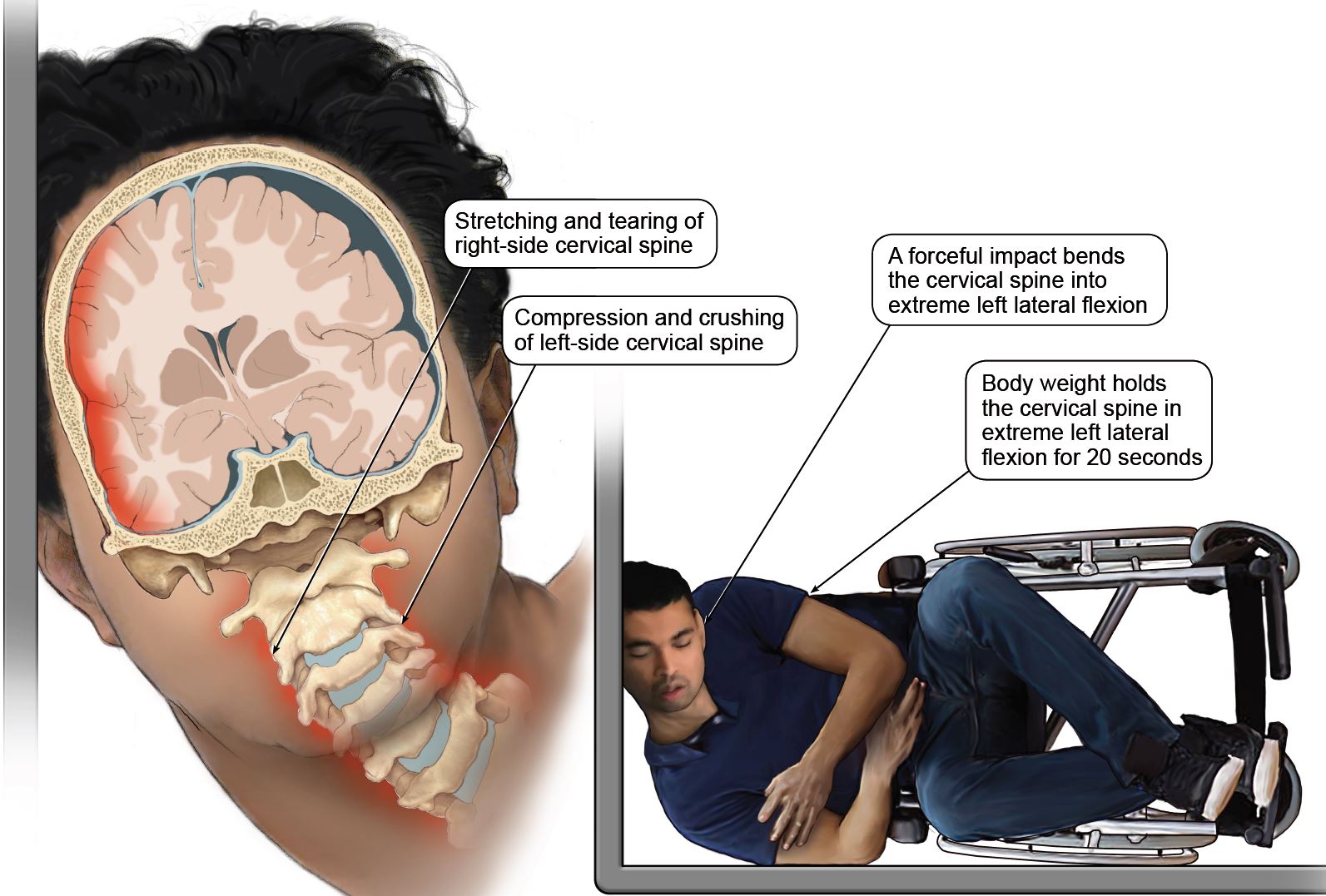 A complete laminectomy was performed on the client’s cervical spine to decompress the injured spinal cord in his neck. This was performed at Henrico Doctors Hospital, where the client spent several weeks recovering.  Next, the client spent three months in a Richmond, Virginia rehabilitation facility. At that time, the client could not walk at all and he was showing very little improvement. His parents became convinced that, if he stayed in the rehab facility, he would never walk again. They took him home and, through sheer determination and hard work, got him back to the point that he could at least stand and walk short distances.

But things had changed. The client could no longer walk as far as he used to walk. His left hand was in a permanent state of being cupped, and he held it close to his body and guarded it.  Whereas he could previously use the left hand to grasp items or to balance himself, now the left hand was useless.  The biggest change for the client and his family was that he now required two-person assistance with transferring from sit to stand and many ADLs.  Whereas before the incident, one person could handle him, he now required two.  This was a big deal for the family, which resulted in them selling the family grocery store so that the father could be at home to assist more often.

Kevin Mottley and Ben Kyber of The Mottley Law Firm filed suit for the client in Virginia circuit court.  In preparing the case, the firm hired experts in the fields of physical medicine and rehabilitation at the VCU Health Center (MCV), neurology, neurosurgery, and life care planning.  The biggest challenge for the experts was in separating the client’s pre-incident disabilities from those that were caused, aggravated, or exacerbated by the incident.  This required careful review of the client’s past medical records and education records, medical examinations by the experts, and many interviews with family members who could testify to the client’s condition over time, and how it changed after the incident.  We sent two of the experts to the client’s home to more fully understand his needs at home.

The defendant, who admitted liability in the case, focused its defense on attacking our client’s expert witnesses and damages.  Like us, they hired experts in the fields of neurology, neurosurgery, physical medicine and rehabilitation, and life care planning, including several from Virginia, one from Duke University, and one from Tampa, Florida.  The client underwent several medical examinations by the doctors hired by the defense.  The defense experts contended the incident didn’t materially alter or worsen the client’s previous life care needs.  They assessed his future damages from the incident as being only $12,000 – the cost of therapeutic treatments for his left hand.  The defendant also sent a private investigator to the client’s home.  On one occasion, the investigator filmed the client walking with the assistance of one person, his father, from the front door of their home to the family minivan.  But the surveillance also recorded that it took three people to get the client from a standing position into the van, a key fact supporting our experts’ position that the client required two-person assistance with transfers.

The parties agreed to mediate the case in November 2019.  At the mediation, the parties agreed to resolve our client’s claims with the defendant paying the firm's client $6.5 million.  As of the publication of this report, this result is the 4th highest settlement or verdict achieved by a lawyer in Virginia in 2019, according to Virginia Lawyers Weekly.